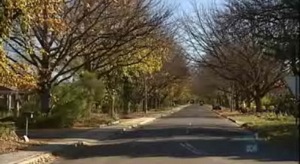 On Friday 24th July 2009, ABC Stateline ACT showed a special edition covering the story of four friends and neighbours who moved to Canberra in the early Sixties,when Dickson was so remote it was described as North Yass.

* The ABC Stateline video archive is not permanent and it is anticipated that the video will no longer be available for viewing on the ABC Stateline website after 25 October 2009.