ACTPLA have notified that development application 200915210 for an “Estate Development Plan” has been lodged by CB Richard Ellis for portions of Section 63 and is currently open for public comment until 9 September 2009.

North Canberra Community Council reminds the community that individuals are entitled to inspect, lodge comments and make their own representations on this development application.

Representations must be forwarded to the ACTPLA Applications Secretariat at 16 Challis Street Dickson, by email to or mailed to app.sec@act.gov.au PO Box 365, Mitchell ACT 2911 by the due date.

We have reproduced the following text to provide some background on the nature, size and scope of the Section 63 site and any possible development. This material has been reproduced from Leighton Properties News (Issue 15, March 2008): 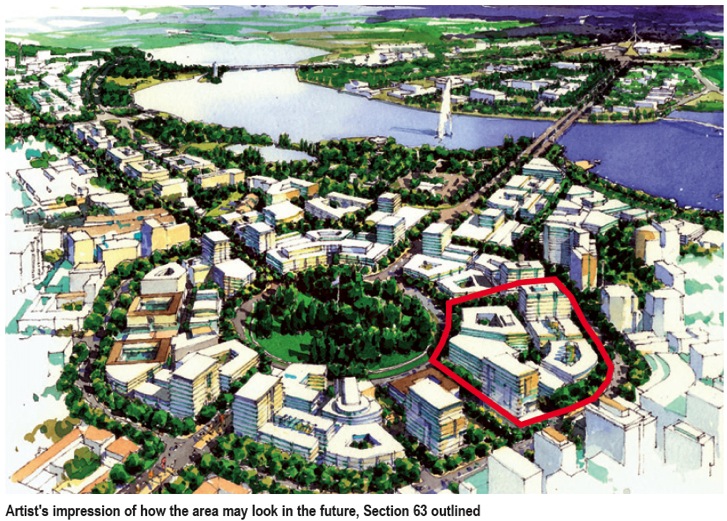 Section 63, currently a car park situated in the City West area of Canberra, was purchased by Leighton Properties and mirvac in December 2007.

This whole city block is at the very heart of Canberra in the City Hill Precinct. It is a defining and high profile location complementing the prominent adjacent sites already built and occupied.

It is also opposite 7 London Circuit and 18 Marcus Clarke Street, both landmark developments initiated and managed by Leighton Properties.

The new development is bounded by London Circuit and Vernon Circle in the Canberra City Centre on the western side of City Hill and was purchased for $92 million.

With an area of 26,844m2 (approx 2.6ha), the site is a “curved square” and is zoned for a broad range of uses, notably commercial office, residential, hotel, car parks, retail, restaurants and bars. The site can accommodate in excess of 100,000m2 of lettable space.

Section 63 provides an opportunity to create an environment for living, working, recreation and interaction; to design a high profile development
generating innovation, recreation, workability and sustainability; and to set new benchmarks for the future development of the City Hill Precinct.

The development timeframe is expected to be about 7 years and will be split into 4 phases, the final from late 2013 to early 2015. It is also anticipated a superlot will be developed for residential, hotel or serviced apartments, making the precinct desirable from both a commercial and community perspective.

Construction will be undertaken in stages. At this point it is anticipated the timing for these will be –