The North Canberra Community Council believes that the ACT Government should honour its public commitment, on the sign in the photograph below, to protect this block as URBAN OPEN SPACE, so that it will offer enjoyment for the many people whom in future it will help to attract into Turner and Civic. 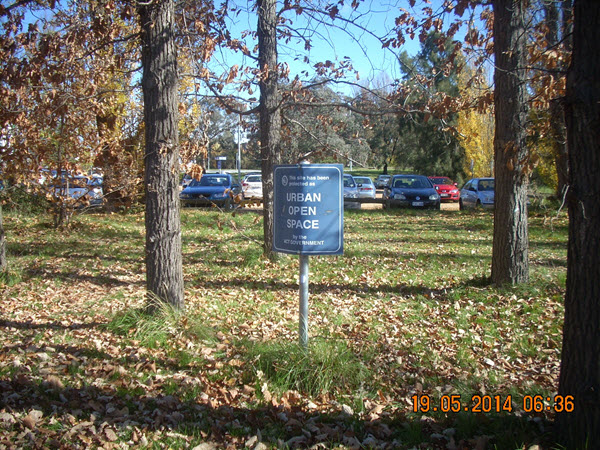 Rezoning of this Block from Parks and Recreation to Transport and Services would also be contrary to the Legislative Assembly’s motion of 14 May 2014, that “calls on the ACT Government to: (a) continue to invest in outdoor recreation areas such as off-leash dog parks, skate parks and community recreational irrigated parks; and (b) investigate the best uses for and partnerships for ACT parks to ensure that they are providing the best utility for the community.”

Minister Simon Corbell was asked about the use of this block, at the climate seminar on 21 May. He replied that this block was being used to encourage more people to live in and near Civic.

We believe that one of the best ways to attract new residents into the City and the Northbourne Avenue light rail corridor is to ensure that they have superior access to high quality services and facilities, including parks and playgrounds.

The Canberra and Queanbeyan Walking and Cycling Map shows that the nearest significant nature park or reserve to the south of this Block is the Lake Burley Griffin foreshore. The only other such parks in this area are City Hill – which is only accessible to people who are prepared to risk limited sight lines as they cross several lanes of 60 km/h traffic – and a small park near the corner of London Circuit and West Row.

If this Block is re-zoned from Urban Open Space, then the distance northwards from Lake Burley Griffin to the nearest significant park to the west of Civic will increase.

Whether deliberate or inadvertent, the proposed re-zoning of this Block is a case of progressive alienation of public open space by stealth.

The first step of the alienation of this Block was to degrade it by using it as a car park – a use that is prohibited under the PRZ1 – Urban Open Space Zone Development Code.

The second step was to undertake consultation:

The Consultation Report claims that the North Canberra Community Council was consulted on this proposal. What actually happened was that the consultant had a discussion with the then Chair of the North Canberra Community Council. The report notes that this discussion raised a number of issues. They included the following issues whch are now much more significant in the context of the proposed permanent alienation of urban open space:

Also we note that, although Territory and Municipal Services advised that “Interstate coach and private operators must be precluded from the site,”

the consultation documents do not appear to explain whether (or, if so, how) that restriction will be mandated.

If the Government is determined to use this Block for a bus layover we would prefer that the Government retain the existing PRZ1 zoning – and the possibility of returning the area to urban open space at some time in the future – by either:

Yours sincerely
Leon Arundell
Secretary
28 May 2014