Crimestoppers: Witnesses sought to burglary on 7th May 2009 of Ainslie newsagency

ACT Policing is seeking witnesses to an aggravated burglary which occurred at the Ainslie Newsagency Thursday May 7, 2009

Around 2.55am a silver Hyundai Excel stopped in front of the shop located on Edgar Street. The vehicle’s lights were shone into the store front for about a minute before a man exited the car and took up a position near the entrance. The driver then reversed up to the store and nudged the plate glass window twice before it shattered. 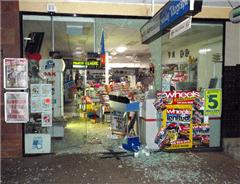 Both men then entered the shop and attempted to open the cigarette cabinets but were unsuccessful. Nothing of value was taken before the men left in the vehicle towards the city along Cox Street.

Both men used balaclavas to cover their faces and wore gloves, with one wearing a fluorescent vest.

It is believed the vehicle used in the raid was stolen from Charnwood shops between 6pm and 1am last night.

Anybody with any information about this crime or any other crime is urged to contact Crime Stoppers on 1800 333 000 or Report Crime Online.