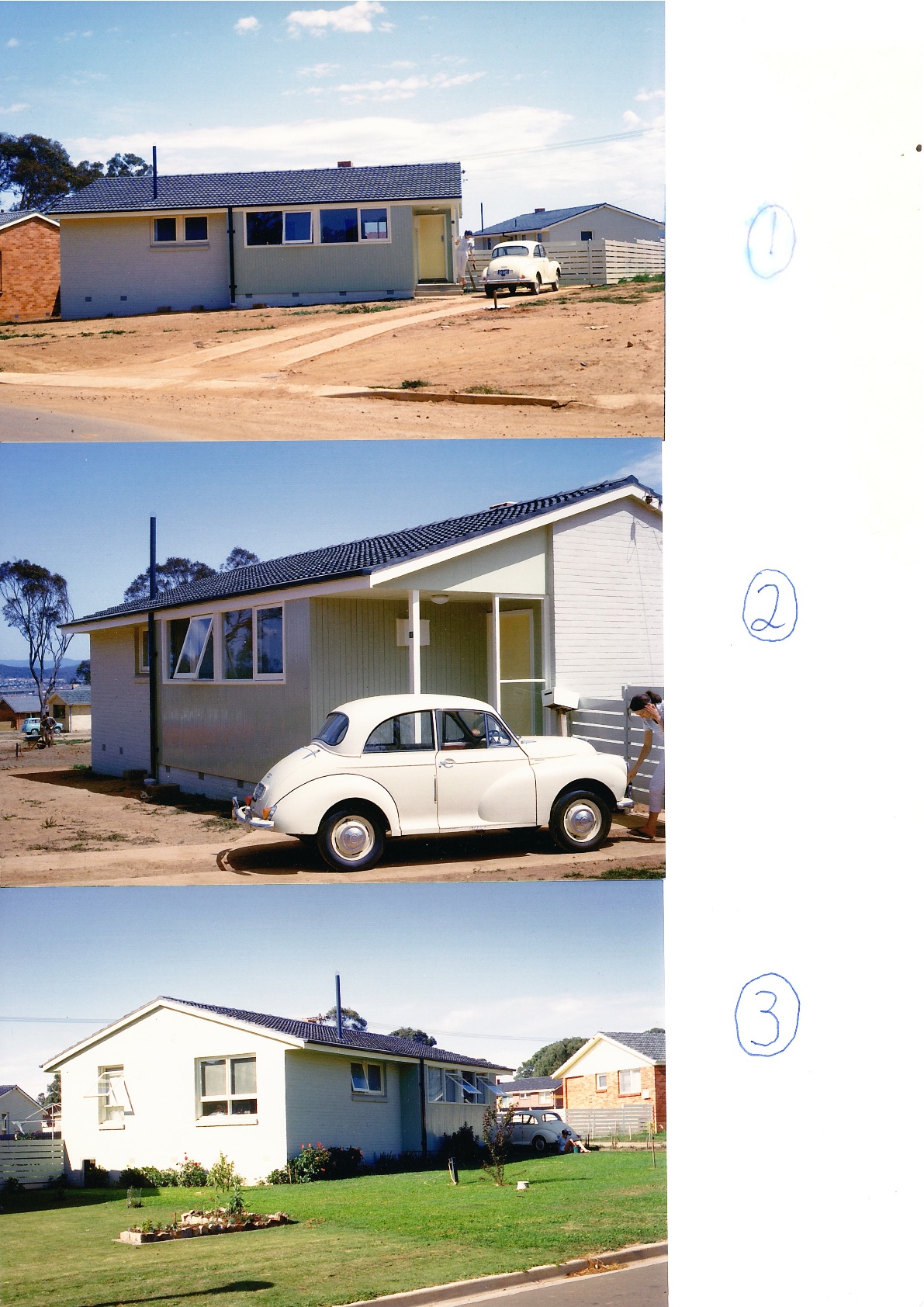 11 Haddon Street in 1963/64 (Courtesy of Ms Anne Bryant)Hackett will be celebrating its 50th birthday in 2013.  To prepare for this, the Hackett Community Association is assembling stories, photos and other historical material.  This may be published in a book in future.  In the meantime we will publish much of this material on this site to preserve it and to share it with the rest of the community.

If you have any materials you would like to contribute, please contact James Walker on 6247 0951.  We can make copies of materials and return originals.

Recollections of Hackett in 1972

This literary contribution relies on the memory of an 11 year old at the time with predictable subjective influences such as the innocence of youth incorporating limited experience which results in an optimistic vision of life as being inherently sweet.

The centre of life in Hackett was the shops which featured a full range of outlets including Georges Supermarket, John Moore’s Pharmacy. the Butchers, Angelos Green Grocer & Take Away, the ‘corner newsagency’,  Lil’ Owl Supermarket, the Barber, the Post Office, a Dry Cleaners plus a Launderette.  I believe there was a dry cleaners and possibly a Hairdresser. At times shoppers had to park in the service lane behind the shops parallel with Mills St.

For 20 cents the choices were challenging: a Dentists delight in buying lollies at Georges, the need to enlist a mate to help demolish the 20 cent serve of chips at Angelos or maybe a Matchbox car from the Newsagent. Some may have chosen to send 4 letters with the standard 5 cent stamps but this endeavour was not widely pursued by 11 year olds. In a time when flowing locks and side burns were the trend, a trip to the Barbers was unlikely to enhance such customs as the subject Barber was a specialist in ‘short back & sides’ despite what the customer requested.

Hackett Shops had what we knew as a Service Station adjacent which was a Shell franchise. 20 cents bought a gallon of fuel *(which wasn’t of much use to 11 year olds). Across the road was the local bus (subsequently known as Action) interchange where commuters could chose between routes 25 (via Dickson) and 28 (via Ainslie) which both went through Civic at comparable times. Route 25 finished at Red Hill and Route 28 at Narrabundah.

Indeed, now outdated community facilities were in demand such as the post box near the corner of Rivett and Verco Streets plus the public telephone booths in Newton St and Madigan St (near the MacKenzie St intersection).

In the block occupied by the Kindergarten this was the only structure. No tennis courts or Canberra Revival Centre. The latter created some confusion as my undoubtedly sound educational background at Hackett Primary School instilled an interpretation of the term ‘revival’ as some sort of rebuilding of past ethos yet Canberra was only 60 years old and most of the original was more than evident.

At the southern end of Hackett Oval there was a dirt track running to Maitland St which was perhaps not on the Department of Capital Territories master blue print but served a useful purpose for athletes seeking a 20 cent serve of chips from Angelos before he closed or misdirected claims at the Canberra Revival Centre. Hackett Oval was extremely well maintained with a systematic sprinkler system coming into effect at what appeared to be opportunistic times – mainly during lunch time at Hackett Primary.

The foundations of the suburb remained unchanged with the exception of the construction of town houses between Grayson and Tryon Streets in this era. The demography reflected young families in an environment that whilst 5 kilometres from Civic nestled on bushland abound with native flora and fauna. Locals would regularly gather mushrooms on the slopes of Mt Majura witnessing kangaroos in full flight and set their dogs on the rabbits. Reliable sources indicate yabbies were even caught in the Mt Majura dams and it is probably insignificant that it wasn’t until 1976 that a second practising Medical Surgery was established in Madigan St (near the western intersection with Maitland St). The first being in MacKenzie St (also out of a domestic residence) near Dunn Place.

The centre of the universe for me in 1972 was Hackett Primary School and always living by our motto of ‘Hope and Faith’. The suburb was the same age as us (& remains so) thus there was a sense of growing together. Late in the year we had the new French designed flash passenger aircraft  ‘Concorde’ fly over the school which was special at the time. I readily acknowledge such a description did not spring to mind in 1972.

Some may recall the ‘flower man’ who frequented Hackett Oval (I understand he would have caught the route 28 bus). He was an aged citizen of Greek origin who sang songs in his native tongue and always wore flowers as a reflection of his affinity with nature. A harmless bloke who was perhaps embittered by society but of course found sanctuary in Hackett.

transformed from a landfill site to a modern ‘ Waste Transfer Station’. Modern green inspired citizens perhaps justifiably question where rubbish was transferred to but in 1972 it was away from Hackett.

As keen cyclists (when 3 speed hub gears were a luxury) we indulged in an eternal debate about which was the steepest street in Hackett and I have never researched topographic data to resolve the issue as it would it spoil speculative conversation at Wilbur’s Cafe. I maintain Harris St was the toughest to climb, whilst a relatively short clamber it was the most demanding.

In 2010 I have images of current locals out with theodolites disproving me and encourage such activities to enhance the Hackett spirit. In September 2010, I called in at Wilbur’s Cafe for a refreshing ale with a peer from Hackett Primary. Whilst the atmosphere of Hackett Shops had diminished over 38 years (no challenges in finding a car park) the original bike racks at the south eastern corner remained unmolested.